Remyelination. From biology to therapy

The loss of myelin as a result of diseases such as multiple sclerosis causes serious nervous system disorders, where electrical impulses are not conducted with sufficient speed or stop in the middle of axons. This is what is meant by demyelination. However, sometimes this process can be accompanied by aspontaneous regenerative response in which new sheaths of myelin recoat the axons, a process called remyelination.

The fifth Esteve Foundation Discussion Group, which was held on 17th and 18th October 2011, at the Hostal La Gavina S’Agaró (Girona), discussed the biology and therapeutic possibilities of remyelination .The chairperson of the discussion sessions was one of the world’s leading experts in the study of myelin repair, Robin Franklin, Professor of Neurosciences and Director of the Cambridge Centre for Myelin Repair.

Also taking part in this Esteve Discussion Group, entitled Remyelination: from biology to therapy were the following five international experts: 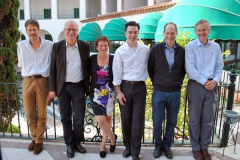